Jeff Connor, MSU Union facilities team member, will be retiring at the end of the academic year after serving MSU for 33 ½ years.

Jeff was referred to MSU by a fellow member of his church. It took almost a year after his application was submitted before he was hired, and with the absence of digital hiring technology, Jeff had to manually update his application and keep up with the hiring process. On Oct. 6, 1987, Jeff began his career at MSU in Brody Neighborhood as a sanitation/facilities worker in Bailey Hall. Shortly after, Jeff transferred to the MSU Union and fell in love. 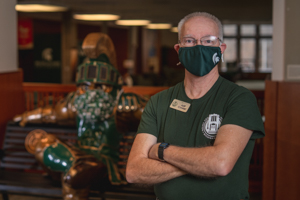 “This place was hopping,” he said. “There were events every day and classrooms all over.” Throughout the years, Jeff said the core responsibilities of his job haven't changed, even throughout the pandemic. “The only thing that has really changed is using the fogger to sanitize furniture and spaces within the building.”

However, one noticeable difference for Jeff has been the space itself. In the 1980s, the MSU Union looked and felt drastically different than today. “You would come in on the first floor and have to wait to walk through the building because it was so busy.”

There were classrooms on the third floor, multiple meeting spaces on the second floor, and a food court on the ground floor. “I remember when there were three weddings happening at the same time. One in the ballroom, one in the parlor rooms, and one in the green rooms.”

The cafeteria was home to Little Caesars, Burger King, Haggan Das, and more! Jeff mentioned that the food court was so popular that the lines in front of the different venues indented the floor. These can still be seen today on the ground floor near the former Media Center. Jeff also remembers finding deer in the food court, not once but twice! The deer were peacefully removed and taken to the woodlot area near south campus. 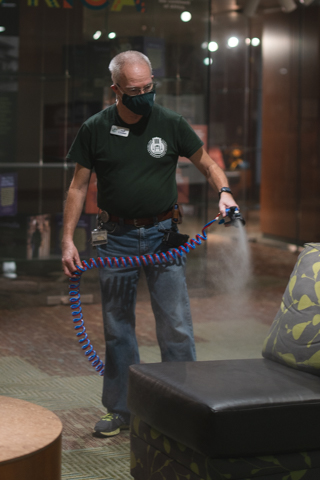 Jeff has also witnessed multiple celebrities and politicians making a stop at the MSU Union. “I was here when Bill Clinton was here running for president. There was also the Bush family that stopped by, and even Cher made a stop here.” Other prominent figures that Jeff saw were the celebrities from ESPN Game Days for the football games. However, Jeff’s favorite celebrity is Sparty, both the mascot and Bronze Sparty. “He was brought in at 2 a.m., and I got to help install him.”

As campus evolved, so did the MSU Union. Campus expanded and offered more options for gatherings. New services and departments were moved to the MSU Union and the building was remodeled in 2014. While Jeff has experienced changes throughout his career at MSU, he noted that several aspects never changed. “The character of the building and how we operate, as well as the employees and people we serve.” Being a building for students, staff, alumni, and community members, Jeff had the opportunity to interact with people from all walks of life. This is an element of the job that Jeff will miss. “Work is work. The memories and people are what make it special.”

Jeff has had quite the experience at MSU. His next chapter includes spending time with family in Michigan's Upper Peninsula, enjoying the outdoors, and dedicating time to playing instruments. We wish Jeff all the best and hope he returns to visit often.

About the Author: Brandon Crawford, senior at Michigan State University, interviewed Jeff Connor on March 25, 2021 in the MSU Room located in the MSU Union. Brandon had a fantastic time interviewing Jeff and hopes those reading this article learned something new about MSU or the MSU Union. “It is an honor to share Jeff’s Spartan Story with the greater MSU community.”