History of the Union 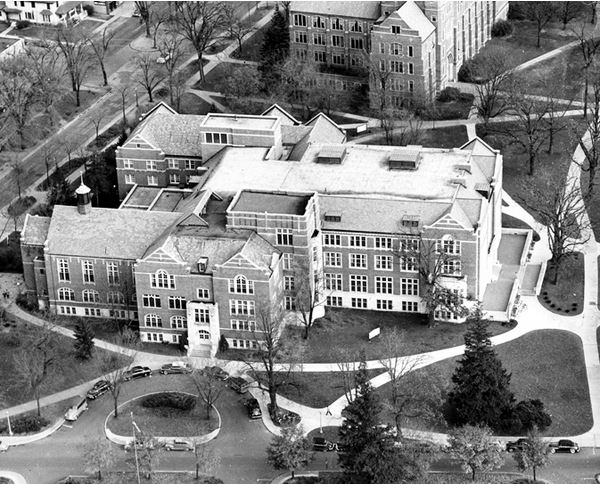 The history of the MSU Union dates back to 1905, when Michigan State University was known as Michigan Agricultural College (MAC) and its student body numbered just 351 students. Since the 1880’s, college unions had multiplied across the country, and there was great interest at MAC in building a center where students could gather. A committee formed to plan the union, but without the funding, the project was just talk. It was a long, hard road before their ideas became a reality.

Ten years later, the MAC Class of 1915 pledged a $5 contribution from each student. The paltry sum of $5 in 1915 was worth about $117 in today’s dollars. It meant so much to them, the students were willing to contribute to a union they wouldn’t even get to use.

World War I intervened, and efforts for a union ground to a halt. After the war, plans recommenced, and planners changed the name to the Memorial Union, in honor of American soldiers who had perished in service to the country. The MAC Alumni Association hired the Chicago architectural firm of Pond and Pond, who also designed the student unions at University of Michigan, University of Kansas, and Purdue University, to draw up plans for the Union with an estimated cost of $650,000 (just about $15,200,000.00 in 2013).

Old-Fashioned Spartan Spirit
By June of 1923, the Alumni Association moved forward with the ground-breaking ceremony, but could not continue without the necessary funds. However, in 1923, people believed in rolling up their sleeves, pitching in, and doing things themselves. It wasn’t that far off from the days of barn-raisings, when people helped their neighbors, no charge.
Robert J. McCarthy, the Alumni Association’s Secretary, organized “Excavation Week” November 19 – 24 of 1923, and male students, faculty, and volunteers were organized into teams of 30 to dig the foundation for the Memorial Union Building. It was hard labor, but they were good sports about it and enjoyed competing with their profs for prizes each day. They were excused from class and assigned to work in 4-hour shifts, while the Varsity band played and the female students served refreshments. (Would today’s women have joined in and grabbed shovels too?)

“Excavation Week” was a one-of-a-kind event and a huge success—it received national attention, which helped to get contributions rolling in again. But when construction stalled due to lack of funds, Michigan’s then-governor Alex J. Groesbeck, a strong supporter of MAC, proposed to raise money through $300,000 worth of bonds issued by the Alumni Association to finish the project.

At last the MAC Memorial Union opened June 12, 1925. The Pond brothers employed a Scholastic Gothic style of construction, and hired many artists to create the many paintings and sculptures that adorn the building inside and out. All of the fireplaces were lined with Pewabic tiles. Over the south entrance of the Union, Samuel A. Cashwan carved a relief sculpture of Prometheous, the Greek god who was believed to bring fire and the arts of civilization to mankind. 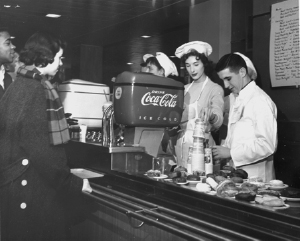 The new building had a 955-capacity second-floor, two-story auditorium for dining, dancing, and meetings. There were 16 private guest rooms on the second and third floors for alumni and friends; a barber shop; a bookstore; a beauty salon; a large centralized kitchen, and the offices of the Alumni Association. The Union became the center of campus life, and it was constantly hopping. It created something for the class of 2,200 students that had never before existed on campus, and it brightened their campus experience.

The Union had both men’s and women’s lounges, 11 dining rooms, a three-season sitting room, and a smoking room and also a billiards room for male students only. Several campus publications such as the Red Cedar Log and The State News opened their offices in the Union.

The Union through the Decades
Since its opening in 1925, the Union has undergone many additions and renovations. In 1936, the university took over ownership and management of the Union from the Alumni Association, due to a default on bond repayment (no doubt the Great Depression had something to do with that); in the late 1940’s, the south wing was added, with major additions and renovations to the tune of $3 million (over $28,500,000 in 2013)—a recreation area with bowling and billiards; a ping-pong room with 12 tables, art and music rooms; a browsing room with newspapers and magazines, dining and conference rooms, and also classrooms, a travel agency, a ticket office, and the new Union Grill, located where the food court is today.

In 1955, when the University officially changed its name to Michigan State University of Agriculture and Applied Science, the building became known as the MSU Union. A handicap-accessible ramp was added. Guest rooms were converted, and other functions moved into the Union. As students became more diversified over the years, their needs and wants changed, and so did the Union.

The Union has always functioned as a home away from home to students and still offers many of the same amenities it did in 1925: ample study space, dining options, meeting rooms, shopping, entertainment events, student organization offices, and much more.

Be sure to stop by the MSU Union and see what’s new!